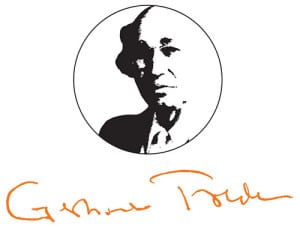 Traveling the world,
at home in Hamburg.

Gerhard Trede was a German composer born in Hamburg on January 17, 1913 as a son of a middle-class family. His parents took great interest in his musical education. To this end, Gerhard Trede started early with violin lessons. In addition to his dedication to music, he was an active sportsman in his schooldays. After graduating from high school, Gerhard Trede studied music at university-level for seven years. His studies were characterized by a broad and encompassing musical interest. After earning his degree, Gerhard Trede worked as a resident composer for the UFA Wochenschau and Neue Deutsche Wochenschau (German newsreels) from 1952 to 1982. His compositions accompanied newscasts, which preceded every public cinema show.

These 30 years represent Trede’s most prolific phase in his life: per year, he composed up to 100 pieces. Thus, the largest archive of music that originates from a single writer was build. It contains music of all styles written for various instrumentations. Thanks to its thematic categorization and accessibility, it is a prime source for many documentaries, productions and TV shows to this day. Gerhard Trede’s opus includes more than 3,000 works, of which some were published under his synonym Victor Cavini. In addition to numerous compositions for film and television, the complete collection also holds symphonic music (e.g., “A Life” or “Violin Concerto in G Minor”) as well as pop and entertainment music. Trede’s extraordinary musicianship is also evident by his ability to play more than 50 instruments, which he often recorded autonomously for many of his studio recordings. He obtained and collected these instruments, playing techniques and their corresponding tonal languages from his various trips to different countries.

During his last years, Gerhard Trede wrote the elegy “Never again war” to process his own experiences as a soldier in World War II. It is to be understood as a call to mankind against the horrors of war. In 1996, Gerhard Trede was awarded the German Order of Merit in recognition of his special services for the people and the country. Later in the year, Gerhard and Elsa Trede decreed that their estate and the future revenues from the rights management of Gerhard Trede’s opus will flow into the “Gerhard Trede-Foundation”. On September 30, 1996, Gerhard Trede passed away. The foundation, with its goal to promote the arts in the field of music, was approved by the City of Hamburg in 1999.

Thanks to the continuing and anew created relevance and prevalence of Gerhard Trede’s compositions – especially for international productions – the Foundation’s revenues are still flowing even twenty years after the death of Gerhard Trede. Compositions such as “amusement park” were used in the well-known American animated TV show SpongeBob SquarePants. Others, like “Fox Boogie” are being used in the computer games series Fallout. A comprehensive selection of Gerhard Trede’s works can be found online in the Catalogue of Sonoton Music GmbH & Co. KG, also on Spotify.

over
0
composition
listened to in over
0
countries
played
0 Mio.
times in the last
5 years

This website uses cookies to improve your experience while you navigate through the website. Out of these, the cookies that are categorized as necessary are stored on your browser as they are essential for the working of basic functionalities of the website. We also use third-party cookies that help us analyze and understand how you use this website. These cookies will be stored in your browser only with your consent. You also have the option to opt-out of these cookies. But opting out of some of these cookies may affect your browsing experience.
SPEICHERN & AKZEPTIEREN